This week we concluded with the presentations for Project 1 in our CS 491 class. Each group had put in a lot of effort in creating their projects, and had come up with many creative themes around how breakfast may look like in the future, where everyone is wearing Augmented Reality gear all the time. In this post, I will be reviewing the works of two groups in particular – Group 5 (Vannia Samy) and Group 6 (Mantovani).

Please note that I am no expert, and the thoughts expressed are merely my opinions.

This project was made by Mirko Mantovani, and all its props are themed based on Alice in Wonderland. Here is a screenshot of the project running on my system: 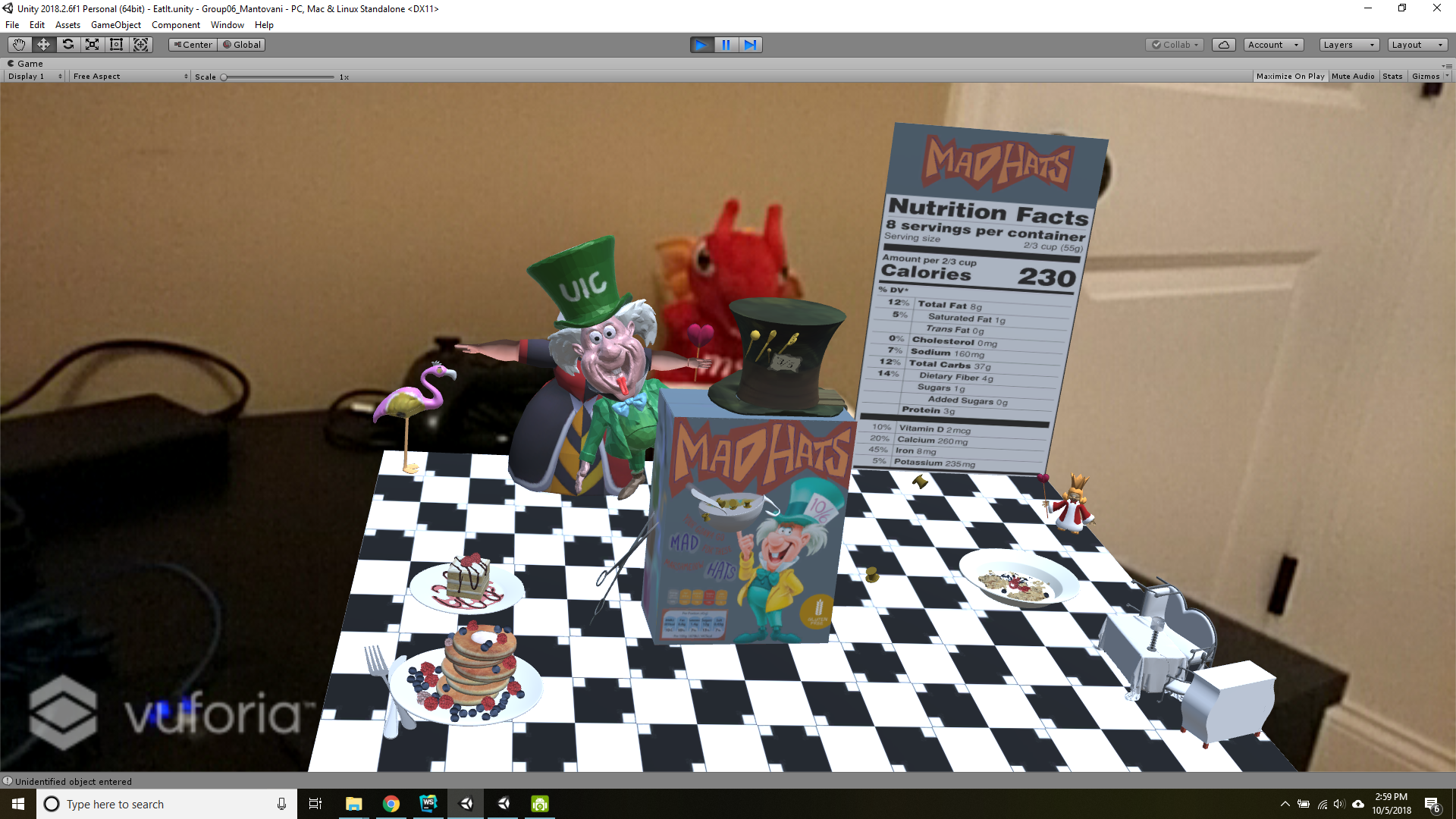 What I liked about this project was that, unlike most of the other projects (including mine), it followed a consistent theme across all its props. The scale of the placemat and the other objects is such that all the props, along with their individual scenes, can be placed on top of the placemat without intersecting each other. This can be seen in the following screenshot:

The placement of all the props around the targets is also worth-mentioning. It is a very nice way of augmenting the reality with virtual content, but at the same time, making sure that the augmentations still look and feel real. This approach is standard in this project, and it was the first thing that I noticed while Mirko was presenting his work in front of the class. 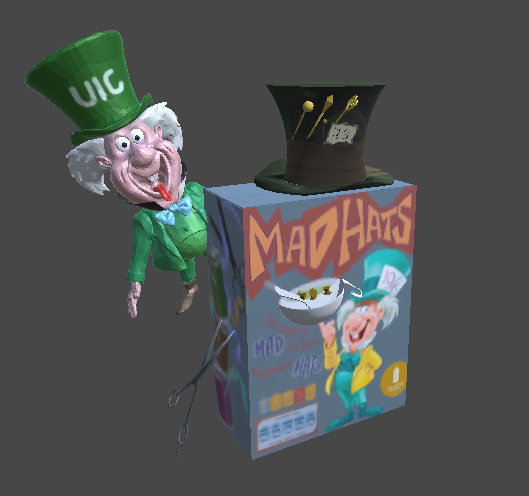 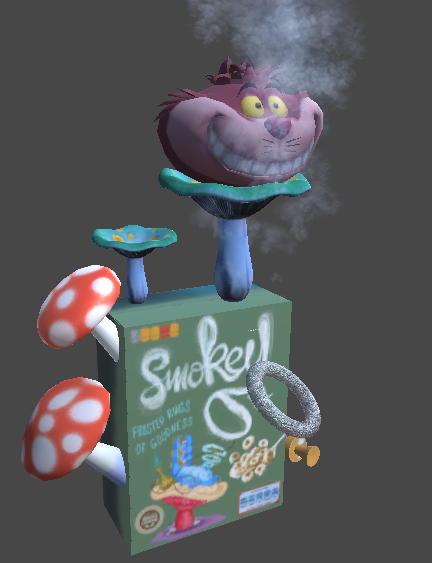 Likewise, the cylindrical target is replaced by Aced Tea inviting the user to drink it. The custom multi-target depicts a rabbit hole. We can see a rabbit, pencil-head duck, a jar of jam, and a bottle of coca-cola. The rabbit is asking the user to follow him. 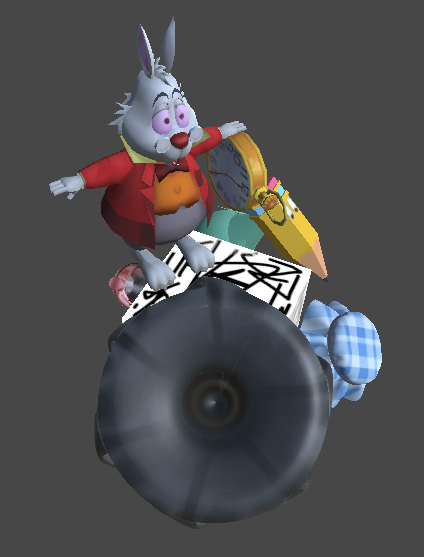 I liked the idea of creating the magazine as an Alice in Wonderland Cookbook. The magazine informs the user of which food products go well with each other, and which do not, in infographic style. The back and previous buttons placed on the magazine also blend seamlessly with the rest of the graphics and do not look artificial. 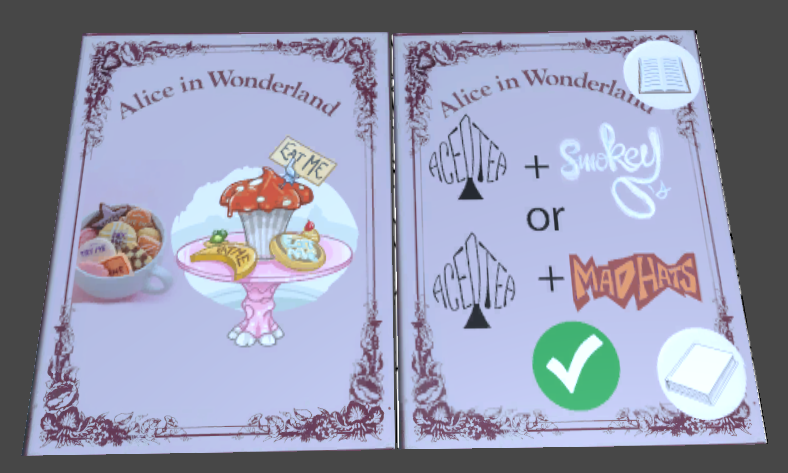 The best part was the interactions between the cereal boxes when placed on the placemat. The placemat not only shows the nutritional information whenever an item is placed on it, but it also shows delight and concern when two products are placed on the placemat, depending on what goes well with what, as dictated by the cookbook!

The entire theme and storyline of the project, along with all the interactions and animations, is coherent and engaging. This project artfully depicts Mirko’s creativity.

This project was made by Ramnarayanan Vannia Samy. Here is a screenshot of the project running on my system: 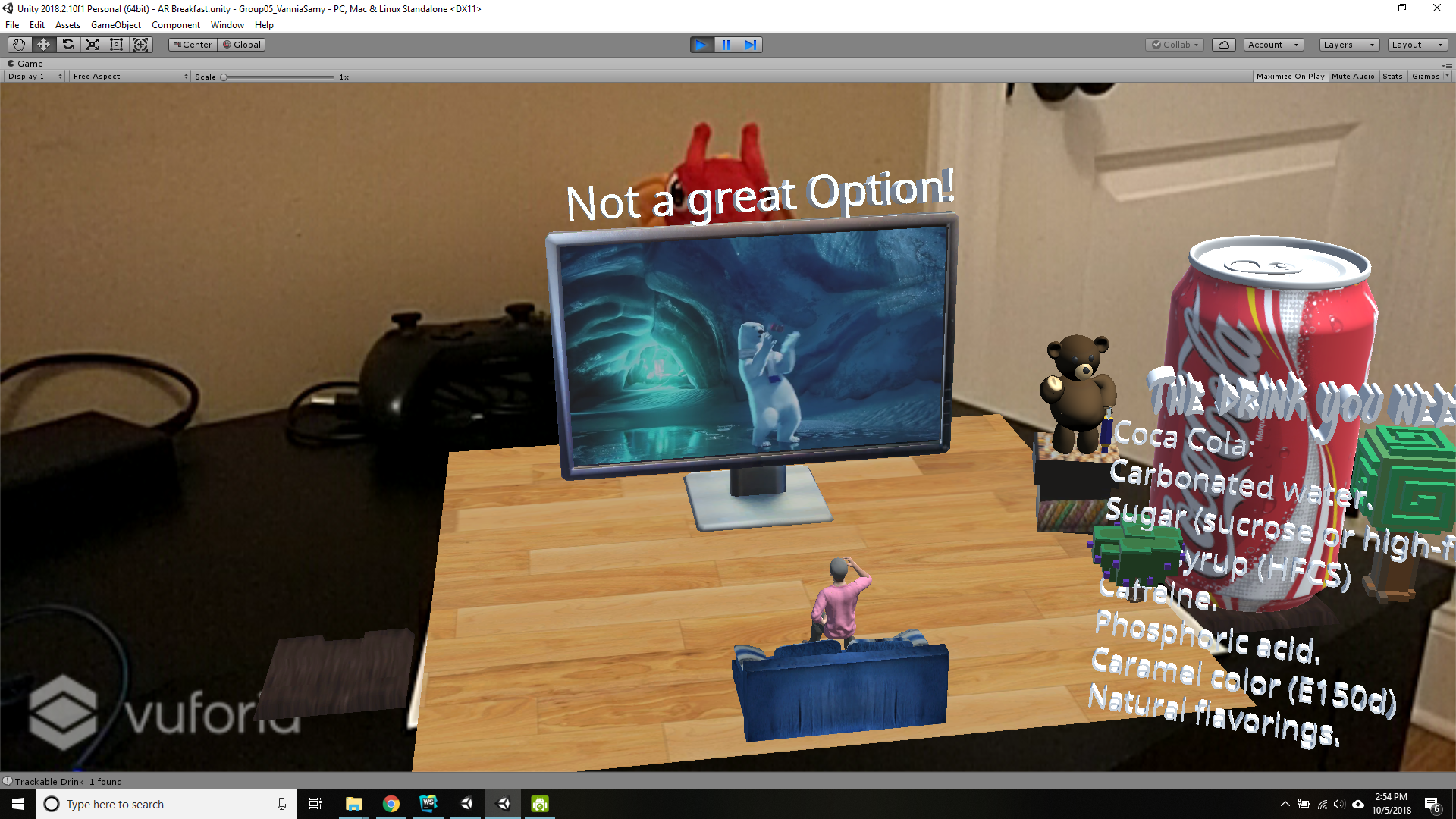 When the placemat is detected, a living room scene appears which shows a man sitting on the couch and watching the television. Putting the television in that scene was a clever way of displaying content in the augmented reality scene. Additionally, the addition of two platforms was a good way of letting the user know where to place other objects. 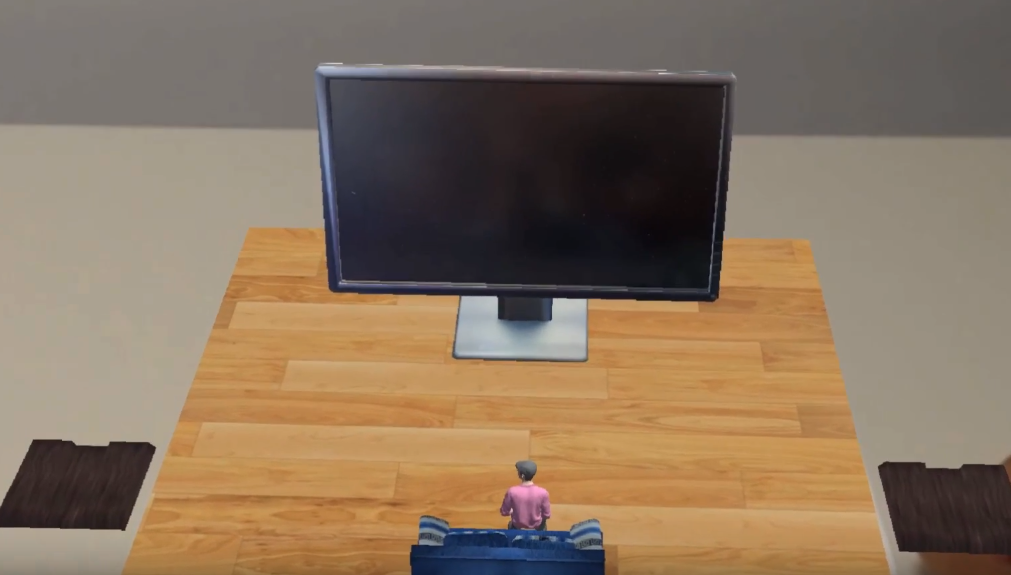 There are 2 cylindrical targets in the project – The first target shows a can of Coca-Cola with a waving bear as the mascot. The second target shows a black can, called Crystal Drink, with two crystalline structures and a tree protruding out of the can. I liked how the scene was created with virtual objects coming out of the real prop, that do not obscure the real-world much. 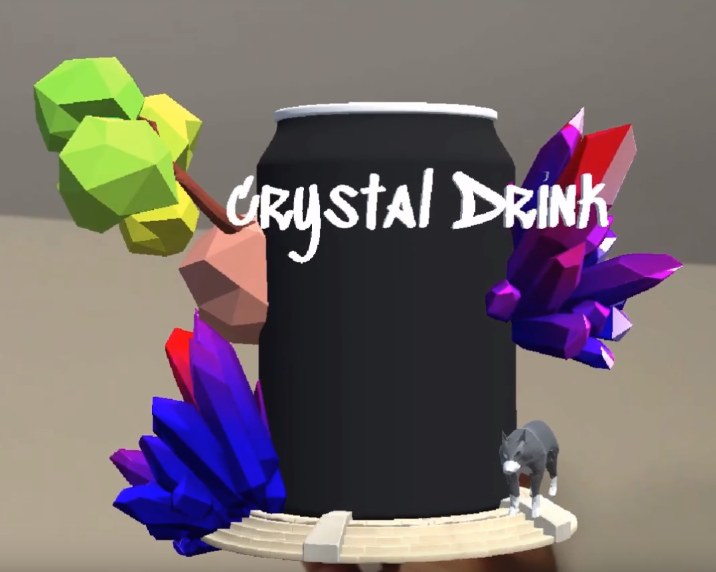 The Froot Loops cereal box also uses a similar approach to object placement as the crystal drink. Although the original froot loops mascot is a toucan, the custom-made parrot mascot looks cute and suits the job. Adding an animation to the parrot would have made the scene more lively. In addition, I liked how a video visualization was placed at the back of the cereal box along with froot loop’s tagline. 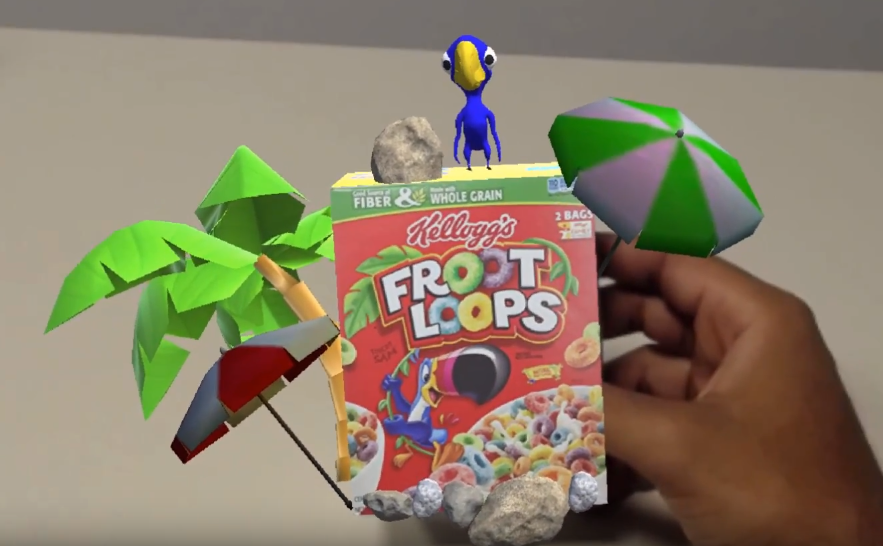 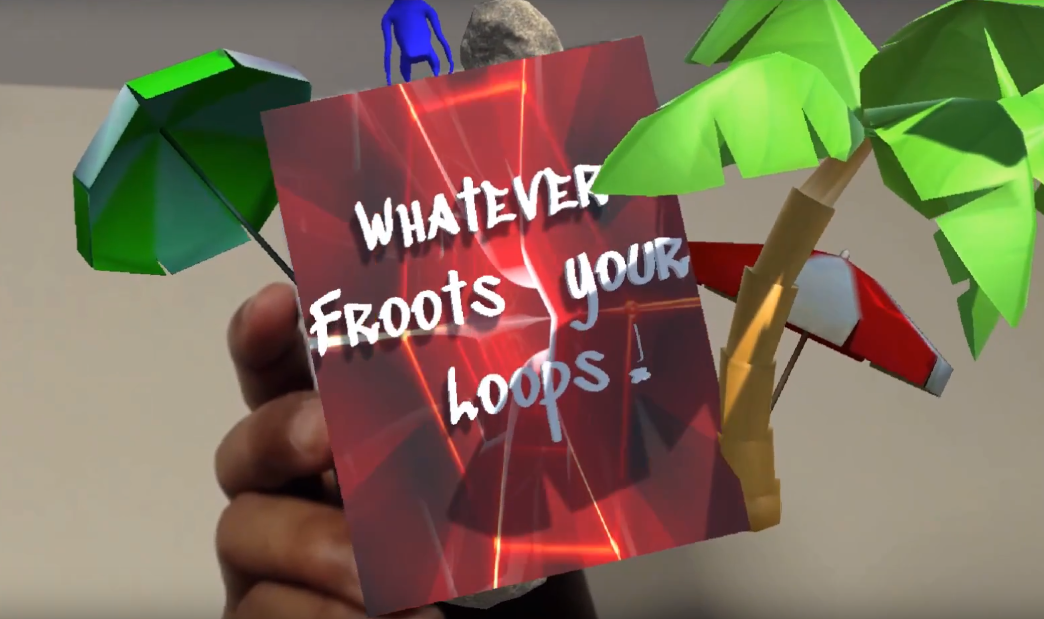 The custom cereal box is labeled as the Void Box with a sci-fi theme. The addition of the death star, and the Darth Vader background music, was a nice touch to the scene! 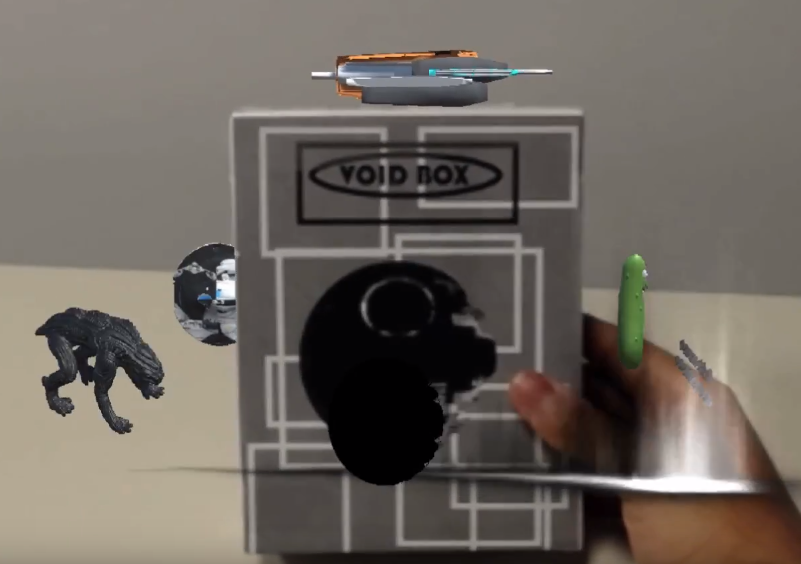 The magazine scene consists of 3 pages, including the cover, which the user can switch between using the virtual buttons. Each page shows a 3D holograms which augment the content of the page. For example, the second page of the magazine talks about Donald trump and his policies, and uses charts, videos and 3D models to supplement this news. This is exactly how I imagine magazines and newspapers of the future. 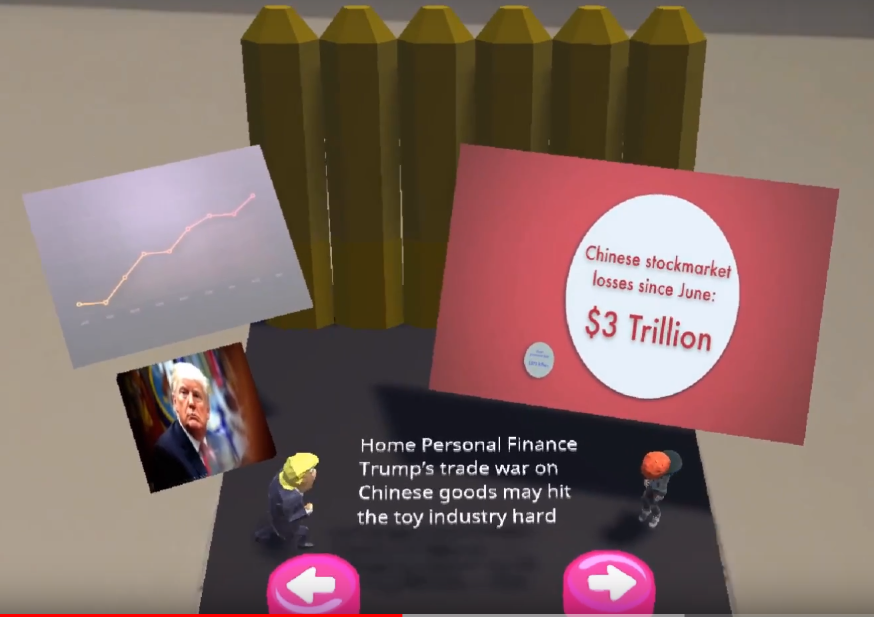 The best part I liked about the project was the interactions between the placemat and the other objects. When an object is placed near the placemat, the placemat shows the object’s ingredients and tells whether it is a right choice or not for breakfast. Additionally, the television starts showing the advertisement for the product, and the man on the couch starts cheering or booing in line with the placemat’s opinion of the product.

When both, Froot Loops and Coca-cola, are placed on the two platforms beside the placemat, a face-off kicks in between the Coca-cola’s bear mascot and Froot Loop’s parrot mascot. I really liked how the entire face-off start and end animations were orchestrated – the couch disappears, the man stands up, food items dissolve-in instead of just appearing. 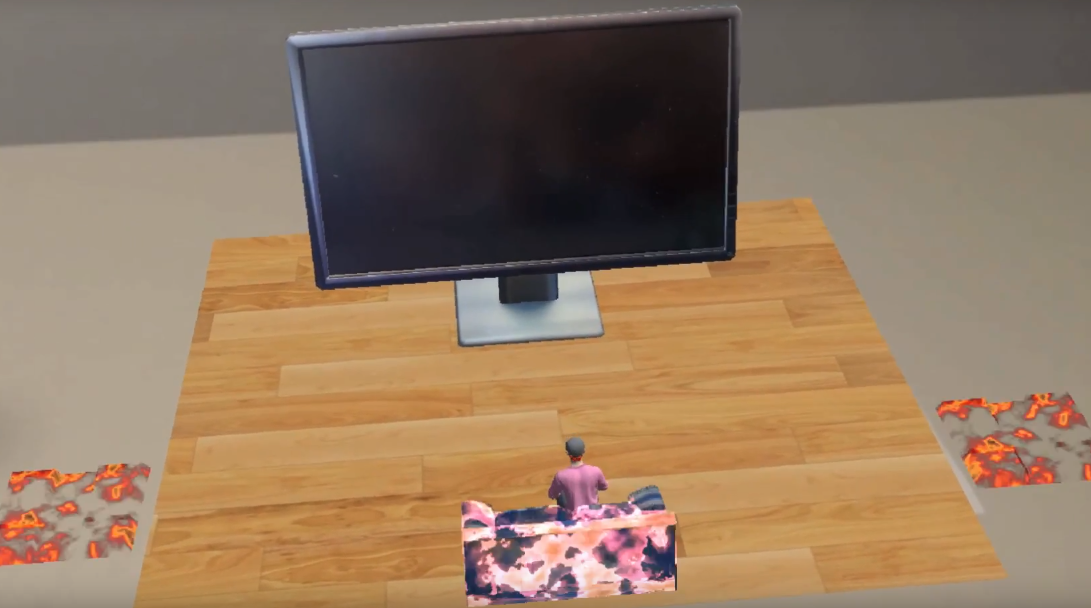