Assignment #4: Wondering what's up there in the sky? Augmented Reality might have an answer

“It’s a Bird…It’s a Plane…It’s Superman!” Well, probably not, but if you have ever wondered looking at the sky – “What is that?” – there are many Augmented Reality apps out there that can answer that question for you. All you have to do is open one of these apps and point your smartphone camera towards the object you are curious about. The app will show you exactly which star, constellation, or planet, are you looking at.

Have a look at the following screenshots that I took using the SkyView app for Android: 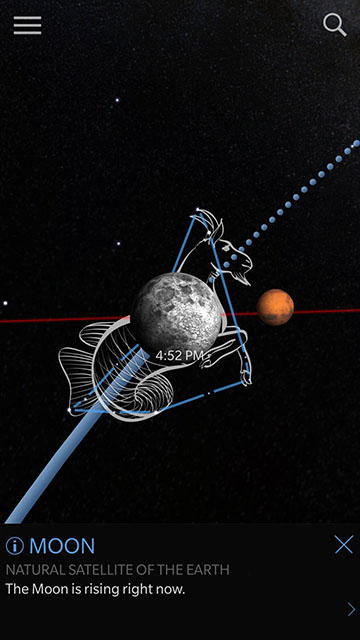 The Moon passing over the Capricorn constellation, with Mars in the vicinity 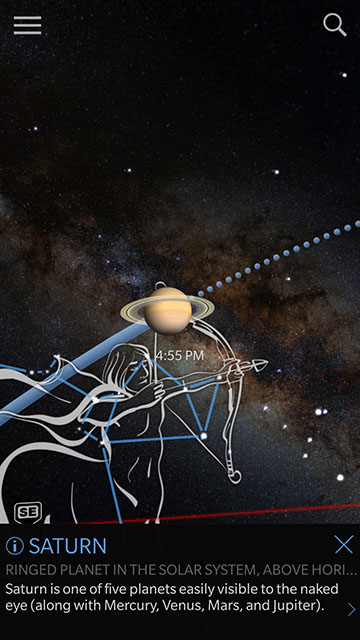 Saturn passing over the Sagittarius constellation

The app not only shows you the object you are pointing at, it also shows you a description of the object, and some facts about it. It also highlights the trajectory of the object, and also shows you the time when that particular object will be at a given point in its trajectory. In the AR mode, it superimposes the star data onto the real-time image from your camera, allowing you to stargaze at night (or day, if you want). With the help of night mode, you can use the app to gaze at stars to your heart’s content, without worrying about the blue light from your phone affecting your vision in low-light conditions.

So, how does this work? The app probably does this using the following sensors on your mobile device:

The data from the above sensors is enough to allow the app to search its database for the stars and planets that must be visible to the user at the given time, location and direction. The app can then map these objects onto the celestial sphere1 and help the user in identifying what they are looking at. Needless to say, such apps are very popular among stargazing enthusiasts.

In the future, when everyone is rocking their stylish pair of AR glasses, or other futuristic AR gear, finding information about what you are looking at, will form the most widely used application of AR.

Just by looking at something that you don’t recognize, you can pull up all the information you need about it. How many times have you felt awkward having conversations with people whom you have met earlier, but forgot their names? You will have nothing to worry about – your AR glasses will fetch that information for you, and maybe even tell you if it is their birthday today! Although this sounds borderline creepy, but one could argue that this is no different than people looking you up on social media, like Facebook, LinkedIn, and Twitter, or using an app like Truecaller, that allows you to identify almost anyone calling you on your smartphone – it just requires less effort than these well-established forums. By the time such an AR eyewear becomes mainstream, hopefully all the privacy issues will get sorted – either by means of laws, or acceptance by the society, or both – so that this piece of technology doesn’t suffer the same fate as what Google Glass did, around privacy issues arising from its video-recording feature2.

Let’s discuss further what lightweight, accessible, and affordable AR gear may bring to the table, with respect to its application in observing objects in the sky. Stargazers will be able to enjoy the stars even during an overcast – the objects that have been obscured by the clouds, can be superimposed on them, to create an illusion that the user is able to “see-through” the clouds. Similarly, people will be able to observe rare celestial events, such as solar/lunar eclipse, and comets passing by, even when the weather conditions at the user’s location doesn’t allow her to do so. In this case, real-time footage of the celestial event may be streamed directly to the AR gear, when the user looks up at the sky. Sure, we can achieve this today using our smartphones, but the experience will be more profound, and seamless, when done using the futuristic AR gear. The beauty of the entire sky, lit up with stars, comets and planets – normally invisible to the naked-eye – will be mesmerizing to the enthusiasts and the uninitiated alike!

With an ability to view the sky in such details effortlessly, the power of such apps can be fully realized. An avid stargazer might choose to receive non-obtrusive notifications in the sky, reminding them of any ongoing celestial event. Coupled with a celestial compass – one that overlays celestial coordinates over the horizon – setting up your telescope to observe an event closely, will become extremely easy. Stargazers may mark interesting celestial body(s) onto the sky, or highlight and share constellations with others – a feature which might come very handy while enjoying the night sky with your loved ones, who have trouble figuring out which star you are actually referring to!

To achieve this, the AR stargazer app will need to create a content-sharing platform for its users, which may in turn connect with other social media platforms, such as Facebook, to fetch the user’s friends, with whom she wishes to share her findings. The user will of course be able to filter whose notes or collaboration requests she is interested in seeing at the moment. Likewise, the user might choose to follow certain clubs, or organizations like NASA, that may instantly make the latest news, or discoveries, available to their followers.

Putting together such a platform is a fairly simple task, even today. This platform will need to integrate with other social media platforms, and expose an API for organizations to share their content (data) with its users. Marry this with a beautiful and intuitive user interface, and we will have a killer stargazing AR platform. Now all we need, is an AR gear which we can wear all the time!